I Love This Tea. 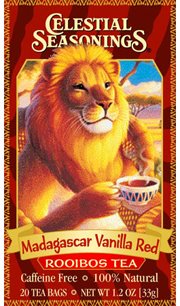 I didn't start drinking tea until a few years ago.
I never liked it. I was a coffee drinker all the way. I dabbled with herbal tea for a while (peppermint, cammomile, ginger etc.) but still preferred coffee. Then a few years ago, I found out that I had acid reflux disease. The doctor said "NO MORE CAFFEINE". I nearly died. At first I thought he was kidding, but he assured me he wasn't. Then I asked him almost hysterically if he was serious and how could anyone live without coffee?
He calmly told me that it was possible, because he himself had given it up and his acid reflux had greatly decreased. I thought to myself "OK I can do this". It took me about 2 months to totally get over it and I stopped having withdrawals in about 2 weeks. Now I am a social coffee drinker and drink tea everyday, twice a day. I alternate from black, green, red, white and still occasionally drink herbal tea as well.

I discovered this tea last month and it's worth trying.


This is a perfect after dinner tea. It has a unique aroma, very warm and almost intoxicating. It seems like I'm drinking a Latte or Coffee drink but it contains no caffeine and I don't use milk or sweeteners.

It is known as ROOIBOS TEA which is brewed from the leaves of rooibus, an African shrub (pronounced roy-bus). It is also known as red tea or red bush tea. According to the inside flap of the box, it is naturally caffeine-free, antioxidant-rich and is found and sustainably cultivated only in South Africa's Cedarburg Mountains. It also states that for centuries the local people have enjoyed rooibos for its delcious flavor and healthful properites.

Here is a little narrative from the side of the box: "When the king of the animal kingdom has tea, he sips Madagascar Vanilla Red Tea. With its magnificent fragrance and lush taste, this naturally caffeine-free red tea flavored with real Madagascar vanilla bean resonates with the wonders of Africa. South African red tea is prized for its refreshing flavor, hot or iced, and as a source of antioxidants. Wrap yourself around a steaming cup or capture the chill of roaring good refreshment!"

I love tea...really I do. I have too much in the cabinet and I own too many books about tea.

BUT, if my Dr. told me "no more caffeine" I may well have ended his life.

I LOVE coffee. That being said, I put so much milk in it (more like cafe au lait) that I bet I could drink decaf and live.

I love the Madagascar Vanilla Red too!

I like tea, but I'm usually too busy drinking coffee to fit tea into my day. There are many teas that I don't like, though. I buy a lot of teas that I end up giving away or throwing away.

In my drawer here at work I have English Breakfast, Chai, green tea with ginseng and lemon, CS Diet Partner, CS Nutcracker Sweet, remnants of a Lipton's Soothing Moments sampler and a Stash green tea sampler, orange pekoe and cherry vanilla. That's just what I have here at work.

I'm a big tea drinking because of the acid reflux thingy and although I miss coffee, was a Starbucks-every-morning-kinda-person, I've found some really delicious teas. I love a good strong black tea in the morning, bit of milk; not cream, thank you. My favorite all time favorite is Russian Caravan a Pete's Tea blend of Lapsang souchong(sp)that give it a wonderful smoky flavor. Twining's Prince of Wales is a milder version of this blend.

Thanks for the suggestion I'll have to try some rooibos teas.

My draw at work is the same way. LOL.


Mooncrazy, The Russian Caravan sounds interesting, but I've never heard of it. I'll look for it, but if I don't find it, I give the Twining's a try. Thanks for the input.

I too am a big fan of Peet's and also of the above that sister moon stated. I do like The Republic of Tea Blackberry Sage mixed with Twinnings Earl Grey as a starter in the a.m.
I must look for your suggestion at the market......thanks