PUMPKIN PIE...OOH IT'S SO GOOD! 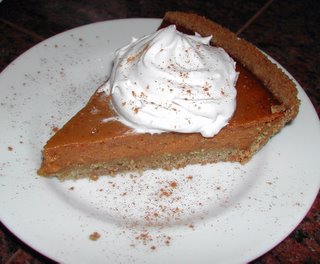 It's not just for Thanksgiving anymore. At my office it's Breakfast!
Posted by Annie at 27.2.06 1 comment:

Onions Make Me Cry in More Ways Than One! 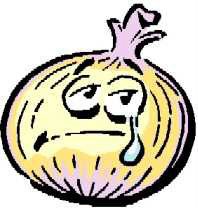 The onion is used as the base to so many recipes, which makes it one of the most sort after flavor enhansers. Many dishes would be nothing but bland without it. Though the onion wasn't always held in high regards. In ancient times the onion was thought lowly because of its pungent flavor. The onion dates back to 3500 BC and is thought to have originated in Asia. Although it was probably growing wild in all continents.
Through the years and all over the world, the onion has had quite a history. The Egyptians once worshiped the onion, thinking that it's round shape and concentric rings symbolized eternity. In ancient Greece the athletes devoured huge amounts because it was thought to lighten the balance of the blood. Following the downfall of Greece, the onion became an important part of the Roman diet. Onion juice to was rubbed on gladiators because they thought it would firm up the muscles. (Huum..... I wonder if it works on cellulite?)
As the onion grew in popularity and spread throughout the world and in different cultures, more and more uses were being discovered. In the middle ages the onion was used by doctors to cure many diseases. Even today the onion is touted as a healthy part of the American diet. Researchers believe the antioxidants which onions contain may block cancer and appear to lower cholesterol.

SO WHY AM I CRYING?
First of all if it is fresh, which is how you want it, it will make you cry when slicing or chopping it. Ok, I know there are many tricks to prevent this. The only one I can think of is holding a piece of bread in your mouth as you chop the onion. Can you picture this? NOT COOL. Plus I just want to get the chopping over with, I don't want to have to go to extreme measures to get a little onion in my pan.
Secondly, I have acid reflux and eating onions is one of the triggers for a bout of serious heartburn. NOT FUN.
THIRDLY, AND WORSTLY. The smell that this innocuous vegetable gives off while cooking will kill you. Sure it smells good in terms of eating, but the house, my hair, my clothes and everything else in close proximity will suck in the odor and it will stay there. I hate this more than, more than uumm......... SPIDERS which is a whole other blog.
The rituals and the lengths I go through to prevent this phenomenon is wacky. Lets start with the special fry sweater I wear while preparing to cook onions or any other smelly food (Fish is another one, but I won't go there right now). I figure it is a barrier to absorb the odor so it won't cling to my clean clothes. I pull my hair back in a really tight bun. He he he. I open windows and doors. I run down the halls of my house and close all room door so as not to trap the offensive scent. I have fans pointing toward the window as to direct the foul smell outwards. Sometimes in the winter the house gets so cold while I'm cooking these wonderful pale colored veggies that I am shivering as I saute. After all of this, my clothes and hair smell as if I were dining in weinorama for the week and the house still reeks. What else can I do? Well I pondered this long and hard and came up with another idea.(I don't give up easily, as my mother would say " You are a Capricorn") I chop the onion and put it in a little bowl with some olive oil, cover it with plastic wrap and microwave on low for a few minutes. Once my saute pan is ready for the onion, I quickly place it in and add all other ingredients. This has helped. Try it and let me know what you think.
Well this was my ode to the onion which makes me cry in more ways than one. I hope you enjoyed it!
Posted by Annie at 22.2.06 2 comments: 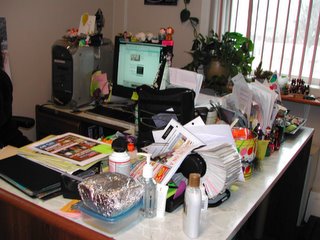 For most people who know me, this would be a little surprising. I usually pride myself in being neat and clean. As you can see this desk is neither. I don't understand what happened. It's like it has taken on a life of its own. My "co-worker" Jen pointed it out to me today and suggested photographing it. When I saw the picture it was disturbing. I recently read somewhere that there are more germs on an office desk than on a public toilet seat! How sick is that? I want to clean it but somehow I just can't. I guess it is my subconscious revolting against all the cleaning I do at home...I don't know. I look at it and feel defeated. It won. Oh well you cant will em all.
Posted by Annie at 17.2.06 No comments:

THIS IS FREDDY THE FOX 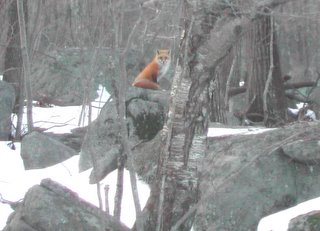 Freddy lives in my back yard. He likes to hang out on the rocks and sunbathe. The scientific name for the red fox is "Vulpes Vulpes". They are part of the Carnivora Family.
They say the red fox is easily recognized by it's color. Which as you can see in the photo is a beautiful auburn. They are native to North America. I read that the red fox are suspicious by nature. I guess we have a little in common. Being clever is another attribute they have earned. Since the red fox can adapt to many climates, habitat types, and human population densities, it would'nt surprise me if there were a few more freddies and fredricas in the depths of the wilderness which I call my back yard.
Posted by Annie at 17.2.06 No comments: 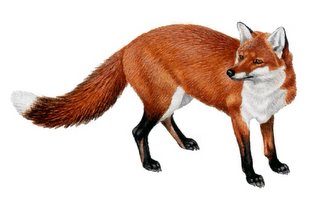 This is a red fox. It is the first and only time I have ever seen one. It looked like part cat, part racoon and part dog. Kinda cool I guess. Although I wouldn't want to get too close.
Posted by Annie at 7.2.06 2 comments:

Use the Whole Lemon Dinner 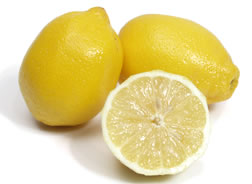 Prep: Zest 2 Lemons over a large piece of wax paper (If you don't have a lemon zester, use the small hole side of a cheese grater, Jen). Set aside about 2 Teaspoons and put the rest in a small zip lock bag and freeze for future use.
Cut lemons in half and juice over a strainer into a small bowl. Set aside.
Save the used up lemons for Jen who uses them for compost.(See Jen's link the Casual Slacker)
Wash fresh parsley and dry with paper towels. Chop leaves and save stems for Jen's compost.
Dredge Chicken Breasts in Flour and shake off excess.

Chicken Piccata
Heat saute pan to medium high heat. Saute Chicken Breasts in 2 tablespoons of Olive Oil about 2-3 minutes per side. Remove from pan. Add Broth, Lemon Juice, Capers and bring to a boil. Return Chicken to Pan and Heat through for about 5 Minutes. Remove chicken to a platter & cover with foil. Add a Tablespoon of Butter and 2 Tablespoons of fresh chopped Parsley to the pan. Let thicken for about 2 minutes. Spoon sauce over chicken & serve.

Lemon Parsley Pasta
Cook your favorite Pasta (I used linguini fini-"thin") In a separate saute pan add about 1/2 cup of the Pasta water, 2 Teaspoons of Lemon Zest, 2 Tablespoons Parsley and bring to a boil. Lower the heat to medium and simmer while the pasta continues to cook. As the sauce thickens add about 2 tablespoons of butter. Add more pasta water if needed. When the Pasta is cooked add it to the sauce and mix throughly to coat it with the sauce.

Newer Posts Older Posts Home
Subscribe to: Posts (Atom)
Sneaking "Healthy" Into Your Food, One Entree At a Time!