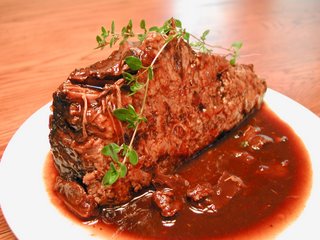 My Very First Pot Roast!
Since this was the first time I ever attempted to make pot roast, I was realy nervous about it! I have to be truthful and tell you I did screw up a little, but in the end it was fabulous!

Part of the screw up has to do with my electric stovetop, which I loathe. OK, now that I got that off my chest, let me tell you what happened.

We all know that when searing a piece of meat, the pan must be very hot in order to create that golden brown crust. Well, my pan was hot alright, so hot that it blackened the meat and smoked my whole house out. I tried to turn the heat down, but it took too long for it to cool down, the damage was done.

The second mistake I made was to follow the recipe to closely. It said to sear the meat on all sides for a total cooking time of about 15 minutes. Well, knowing how hot the pan was, I should have turned the meat much quicker on each side to avoid burning it.

The third mistake I made was to scrape up the brown bits (in my case burnt bits) as I added the liquid. I should have realized that the blackened bits would not melt into the liquid, but just make it taste burnt.

Even after all of these blunders, I continued on with the recipe and hoped for the best. I had reservations about the temperature and cooking time in this recipe after reading several others which recommended lower temps and longer cooking times. My good judgement told me to compromise and reduce the temperature to 300 degrees to start and cooked the meat for around 3 hours. Being such a novice, I decided to break off a piece to taste. I wasn't impressed. The meat was stringy and tasted burned. I was so disappointed. I decided I could live with the burned flavor, since it reminded me of a charcoaled steak, but it had to be more tender. So back into the oven it went. I lowered the oven temp to 225 and left it in for another hour.

Once the meat cooled, I refrigerated it and tried to forget about the disaster. The next day I reheated the roast at 225 degrees for another 3 hours. That did the trick! I also strained the liquid through a sive to get rid of all the burnt bits. What a difference. The meat just fell apart as I tried to cut slices. It was delicious!!!!!!

Preheat the oven to 350 degrees F. (I Started out at 300 degrees and lowered the temp to 225 after 3 hours) Pat the beef dry with paper towels. Sprinkle the beef generously with salt and pepper. Heat 2 tablespoons olive oil in a heavy 6-quart roasting pan over medium-high heat. Add the beef and cook until brown on all sides, about 15 minutes total cooking time. Transfer the beef to a bowl. Add remaining tablespoon oil to the pan, add the onions and saute until tender, scraping up the brown bits on the bottom of the pot, about 5 minutes. Add the garlic and saute 1 minute. Add the wine and boil 1 minute. Stir in the broth and mushrooms. Return the beef to the pan. Bring the liquids to a boil. Cover and transfer to the oven. Braise until the beef is fork-tender, turning the beef over halfway through cooking, about 3 hours. (The first day I cooked it for a total of about 4 hours. The next day I reheated it for another 3 hours at 225 degrees.)
Transfer the beef to a cutting board. Tent the beef with foil and let stand 15 minutes. Meanwhile, spoon any excess fat off the top of the pan juices. Transfer the pan juices and vegetables to a blender and puree until smooth. (I didn't do this step. I picked out the tyme stems and took out the mushrooms, then strained the liquid.) Combine the sauce and rosemary sprig in heavy medium saucepan. Bring to a boil. (At this point, I added 1 tablespoon of cornstarch mixed with 1 tablespoon of cold water and cooked for another 2 minutes to thicken the gravy.) Season the sauce, to taste, with salt and pepper. Cut the beef across the grain into 1/2-inch-thick slices. Arrange the sliced beef on a platter and garnish with rosemary. Spoon the sauce over and serve, passing the remaining sauce in a sauce boat.
----------------------
Well, I did it. I survived my first pot roast and ended up loving it! I've been eating it everynight and it heats up nicely in the microwave, in the gravy on low, low heat!!

What was the worst cooking disater you ever survived?
Posted by Annie at 19.9.06

I get nervous with meats too! The first time I made pork loin I was a little nervous but it turned out great. I really don't like dealing with raw pork...I mean, I cut the bag open and squeezed out the meat so that I wouldn't have to touch it!

Gosh, I don't know. I've had to do damage control many times - I know that.

That looks great. I'm getting into the mood for stuff like this. I have a braised beef recipe on the menu next week.

I'm thinking it was your cut of meat maybe !?
annie I have made this exact recipe several
times and it is one of my favorite giada recipes.
The sauce is rich and very flavorful.

It's recipes like this that make me LOVE LOVE LOVE my crockpot. Any piece of meat comes out stupid tender, and there is very little work involved.

Claire, I don't like touching raw meat of any kind. I get kind of parnoid about what I have touched and if I contaminated anything with meat "germs".Yuck!

Paula, I'm looking forward to trying more recipes like this one. I'll be watching for your recipe this week.

Doodles, It could have been the cut of meat, since I did use bottom round. I did turn out great in the end.

Idydry, Welcome. I don't have a crockpot. I would like to eventually get one though.

For a blogger with "Salad" in her name...that is one great lookin' roast ;)