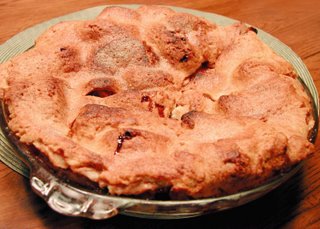 My Inspiration For Making This Pie?
Macintosh Apples for 25 cents/lb.
Sounds too good to be true, right? Well, it was true. The grocery store was celebrating it's 25th Anniversary and was offering things all weeklong for 25 cents. It was a deal I just couldn't pass up. So I bought almost 4 lbs. of apples and set off on a mission to make the best apple pie.

Actually, it is officially my first apple pie. I have made apple crisp and apple cobbler many times, but never a pie with a crust. One of the reasons is due to time and the other is due to fat. Everyone knows that a good crust is made with either butter, crisco or lard. So I have always hestitated to make one, because I figured it would never come out as good if I substitued with low-fat margarine.

I decided to try a crust that was a little different from the norm, by Cook's Illustrated. It is really not meant to be a crust for an Apple Pie. It is supposed to be a pie shell that is pre-baked and ready to fill, but it sounded easy to make so I went for it. I made some changes and ran into some potential disaters along the way, but in the end with a little surgery it turned out great. Actually someone who tried the pie, said it was the BEST CRUST they ever tasted. Not bad for my first try! 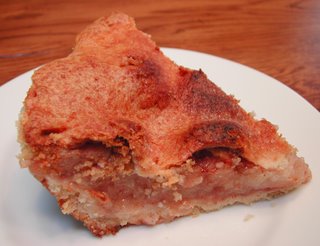 8-10 Macintoch Apples
Lemon juice from 1/2 lemon
2 Tablespoons Tapioca
1/3 cup Sugar or more depending on sweetness of your apples, plus 1 tablespoon for top of crust
1 teaspoon Cinnamon
1/4 teaspoon Nutmeg
1 tablespoon Milk, set aside in small bowl
Double recipe of "No Fear Pie Crust"

Pour apple mixture into prepared pie crust and cover with top crust. Seal and crimp edges. Brush the top of the pie crust with milk and sprinkle with a teaspoon of sugar.

Place pie on a foil lined baking sheet. Bake for about 50 minutes to 1 hour, or until crust is golden brown and the juices are slowly bubbling.

The pastry can be pressed into the pie plate and refrigerated for up to 2 days or double-wrapped in plastic and frozen for up to 1 month. Once baked and cooled, the shell can be wrapped tightly in plastic and stored at room temperature for up to 1 day.

2. With electric mixer at medium-high speed, beat butter and cream cheese in large bowl, stopping once or twice to scrape down beater and sides of bowl, until completely homogenous, about 2 minutes. Add flour mixture and combine on medium-low until mixture resembles coarse cornmeal, about 20 seconds. Scrape down sides of bowl. Increase mixer speed to medium-high and beat until dough begins to form large clumps, about 30 seconds. Reserve 3 tablespoons of dough. Turn remaining dough onto lightly floured surface, gather into ball, and flatten into 6-inch disk. Transfer disk to greased pie plate.*

4. On floured surface, roll reserved dough into 12-inch rope. Divide into three pieces, roll each piece into 8-inch rope, and form fluted edge** (see website for photos 1 through 4). Wrap in plastic and refrigerate at least 1 hour.


5. Adjust oven rack to middle position and heat oven to 325 degrees. Lightly prick bottom of crust with fork. Bake until golden brown, 35 to 40 minutes*. Cool on wire rack. (If large bubbles form, wait until crust is fully baked, then gently press on bubbles with kitchen towel. Bubbles will settle as crust cools.)

* If making pie shell and top crust, split the dough into 2 equal portions. Continue directions for shell and pre-bake for about 25 minutes, until very light brown. For top crust- refrigerate crust and after at least one hour, roll dough out in between two pieces of waxed paper to at least 12" in diameter. Peel off top piece of waxed paper and cut 5 slits in center of crust. Carefully place on top of apples in prepared pie shell.

** This step is fine if you are using this crust just as a shell for another type of filling, but for this apple pie just flatten sides all the way to the top of the pie plate. I followed the directions and the crust shrank. The fluted edge was way to low down for the pie. I would suggest putting some weights, such as dried beans in foil in the crust as it cooks to keep it from shrinking and bubbling up in the center.

What is Your Favorite Type of Apple Dessert? Apple Crisp, Apple Cobbler, Apple Pie, or Other?

that crust looks awesome
cream cheese? never would have thought of that. i bet i coule veganize it easily. still a few more days of summer. i should try it out!

I still fear the pie crust!!! Maybe it is because I have no blender ;)

So I give it two thumbs UP

I've heard of using cream cheese in crusts and have wanted to try it but haven't. I'm planning on making an apple pie at Thanksgiving for my brother (he apparently like apple pie...who knew?). I've never made an apple pie, so I'm excited to try!

That pie crust sounds so wonderful! I printed it off and am planning on making it soon!

Thanks for the recipe!

Neat place you have here! Can I link you? I'm at:
http://harmonia.bloggoing.com

made that crust during the summer for a peach dessert......it is
very good. However I am really in the mood for my mom's
apple dumplings so I think that's what I'm gonna make today.
I post on PBE.........thanks for the nudge annie ;)