Super Pizza... for the Super Bowl. 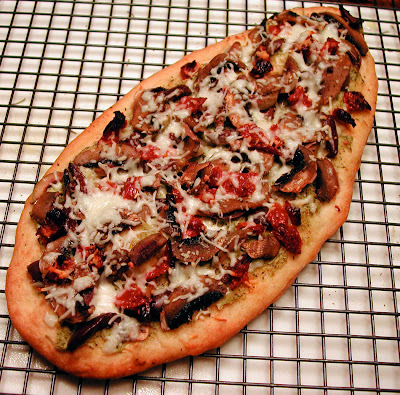 It was a touchdown!
Pizza just seemed like a no-brainer for the super bowl. I have to admit, I am not a regular watcher of football, but I, like everyone else in the world, did watch the super bowl. I figured why not celebrate with pizza!

I used store bought pizza dough which saved a lot of time and trouble, although I do like to make my own dough when I have the time.

Since I wanted to have the pizza ready during the game and didn't want to have a mess around the house, I decided to make focaccia out of the dough and pre-bake it and then add my toppings later. That way it only takes half the time to bake and there is no clean up. I got all my toppings chopped, sliced and ready earlier in the day as well.
It was outstanding! A real game pleaser!!! 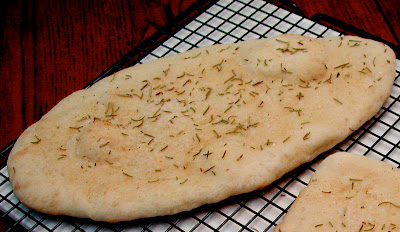 Take dough out of bag and place in a large oiled bowl. Cover with plastic wrap and let rise until double in size, about 1-2 hours.

Remove dough from bowl with floured hands and place on a floured counter or cutting board. Roll out dough into desired shape and press fingers down into the middle of the dough. (I divided the dough in half and made two separate pizzas.) Drizzle with olive oil, top with the rosemary, salt and pepper.

Turn oven temperature down to 400 degrees. Set dough on pizza stone and bake for 10-12 minutes.

The focaccia may be eaten at this point as is or topped as follows:

Spread the artichoke and spinach dip over the top of the focaccia and top with shredded fontinella. Add the olives, sun-dried tomatoes and mushrooms. Drizzle with a one tablespoon of extra virgin olive oil and sprinkle with Italian seasonings.

Bake in a 400 degree oven for 10-12 minutes, remove from oven and add the mozzarella cheese. Place back in the oven and bake for an additional 5 minutes or until cheese is melted.
Drizzle with remaining tablespoon of olive oil and sprinkle with parsley, if desired.

Oh it looks so good! I love it when the crust is thin and crispy.

Do you buy the pizza dough in a tube, or from another source?
I like the Mama Mary's thin pizza crusts. They're good if you're in a hurry.

A perfect combination of looks (it's football shaped), easy preparation, and it sounds yummy.

Em, The dough comes in a bag from local bakeries or the bakery right in the store. Sometimes it's frozen and you just defrost and then let it rise.
I've never heard of Mama Mary's Crust, I'll have to look for it. Is it like Boboli pizza crust?

Jen, Thanks it was.

Claire, Yeah, it just kind of took on that shape so I went with it. I guess it worked out good for the occasion!

Cube, Thanks, yeah it was definatley a touch down!

We don't have dough like that. I guess I could always go to a pizza place, but I might as well just make my own.
I think it is like Boboli, but I don't think I've ever tried Boboli. They are by the eggs, butter, and English muffins in my grocery store. That probably doesn't help, though.