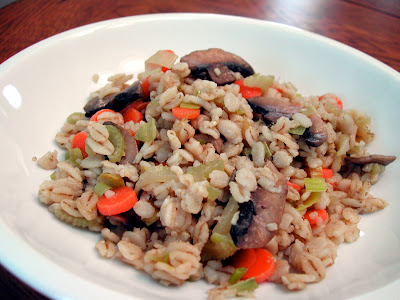 ...Made with Barley
I don't know about you, but I have never eaten barley other than in Campbell's beef and barley soup (which I always liked as a kid). I don't really eat canned soup anymore because it is mostly wretched and the sodium content is enough to choke a horse.

After seeing several recipes and reading about it's nutritional value, I decided to give it a try. I've decided~ like it.

If you would like to know a little more about this ancient grain read on...


Barley is one of the oldest domesticated grain crops. It has been cultivated for over 8000 years. In Athens barley was, according to Pliny, the special food of the gladiators (the hordearii, or 'barley-eaters').

In about 1305, Edward I of England decreed that one inch should be the measure of three barleycorns, and English shoe sizing began; thus a child's shoe that measured 13 barleycorns became a size 13.

Historians report that up until the 16th century, it was the most important grain on the European continent. It was also used as currency and as a measuring standard.

Almost half the United States crop of barley is used for brewing beer and most of the rest is used for feeding livestock. Source: Food Reference Website

If your white rice is getting boring here are a few good reasons to swap it for barley:

1. It is really yummy. It can be served plain as a side dish, as a tasty pilaf or in soup!

2. It's good for you. Packed with nutrition, barley is a very good source of fiber and selenium, and a good source of phosphorus, copper and manganese.

3. Barley's can help keep you regular and provides intestinal protection. (Throw that ex-lax away and say good-buy to expensive acidophilus.)

4. It can lower cholesterol. Ditch the oatmeal tomorrow morning and have barley for dinner!

Here's a recipe that I tried and thought was really good! I found it on the back of the Mother's Natural Quick Cooking Barley...

Very interesting dish.I never had but just in soup.it sound different and I did try ,I have to tell you is really good ans I will have this dish from now on.bambola

I don't want any.

I don't think I've ever had barley, but this sounds good.
We're definitely lacking our whole grains in this area. (Where I live)