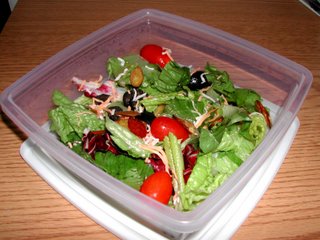 This was my friend Jen's Lunch the other day.
A Salad!!!!!
You may wonder why I decided to post about Jen's salad. I was just so proud of her. Well if you knew Jen you would understand. Her typical lunch consists of a Dunkin Donuts bagel with cream cheese and a large iced coffee with sugar and milk, which she eats at around 8:45 am.

On any given day there may be a choice of the following:
*Newman Oreo cookies
* Processed String Cheese
* Mountain Dew(although she has cut way back on the Dew partly because of my constant nagging)
*A slice of American Cheese on White Bread
* Nature's Valley Fruit and Nut Granola Bars
*Occasionally a small bag of Smartfood Popcorn
*On an off day, a can of Slim Fast

So as you can see the only Green thing she eats may be a little mold on her cheese (just kidding Jen). I have been trying for years to get her to like food and to try cooking things she does like.

Jen just isn't into anything that involves being in the kitchen for more than 5 minutes, if that. If dinner requires more than opening a box of cereal (in her case Cocoa Crispies), putting it in a bowl and pouring milk over it, she's not interested. Ok, sometimes she does cook pasta and her husband helps with the rest of the meal.

She does'nt eat meat but she's not a vegetarian either. Actually she does'nt really like food at all (except junk food, admittedly). She is always saying that she wishes there was a pill you could take to replace eating, like on the Jetson's.

The funny thing is, that she is an awesome graphic designer so you would think being as creative as she is, she would like to cook and like food. Nope!

Jen is actually really funny and a super person, so I hope this does'nt sound like I'm bashing her. I'm just having a little fun with her!

After seeing that salad I think there is still hope for Jen. Check out her blog Casual Slack, it's pretty funny!
Posted by Annie at 13.7.06

Your site is coming up in PREVIEW and I can't link to it. If you've made some changes to the template lately you might need to publish the site again.

Thanks for letting me know, I made another change on linking. Let me know if you can link to it now! Thanks again!

Yes, now I can make the link but your blog still says [BLOGGER PREVIEW] did you publish after making your changes?

I'm so confused, I'm not sure what the problem is. I did re-publish. I'm going to have my computer guru friend Jen help me on Monday. Thanks for letting me know again!

I agree - that site is great - I read it just about every day. Most of her junk is right up my alley.

Hahaha! I just knew she was a junkie! (Junk food lover)
Unfortunetley I am too, but I do love to cook - so I balance out my meals as much as possible.