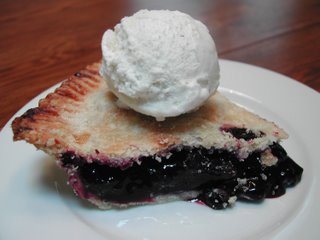 As usual the pie was amazing. My mom just has a knack for baking pies. Of course they are my favorite dessert too! This was actually one of the smallest pies she has ever made. She only had 2 cups of blueberries, so she made due with what she had.

My mom is kind of known for her delicious pie crust. It all started when she came to this country from Italy many years ago. Someone had given her a pint or two of blueberries and she had no idea what to do with them. She had never had Blueberry Pie before or Apple Pie for that matter. (In Italy they make a lot of strudel type desserts with apples, etc.)

She told a neighbor about the berries and she instantly replied "Oh perfect, now you can make a pie". The neighbor graciously instructed her on how to make the crust using flour, salt, sugar and lard. She made it that way for many years until she discovered Crisco Shortening. Now she only uses Crisco for all her crusts-savory or sweet.

Maybe I'm a little biased because it is my mom, but, I have yet to taste a better crust.
The only thing that I don't like about it is that it is so fattening. (Crisco will kill you if you eat too much of it.)

She will be making a Strawberry Pie next- it's her first attempt. She had planned on using the strawberries on Strawberry Short Cake, but washed the berries when she got them home from the store and that's a no-no because they will not keep as long once they are washed. So I hinted that she should make a pie so they don't go to waste! Good thinking huh? Of course I'll be heading over for dinner that night!

As for the recipe, you'll have to ask my mom if she wishes to divulge it. Just leave a comment and I'll see what I can do!
Posted by Annie at 11.7.06

annie - there is nothing better than mom's pie.......and your mom's looks delicious.

That looks great. I had the best piece of blueberry pie this weekend. It had the tang of sour cream but it looked like a normal blueberry pie so I don't think there could have been sour cream in it.

Your mom would be safe sharing her pie crust recipe with me. I could never duplicate it. I don't have 'the gift'.

Then again everything Mixed salad
or Mixed salad's mama makes is awesome.
It's a fact.

How did your mom compensate for only having two cups of blueberries? Did she use a smaller pie pan, or just not fill it up as much?

I ask because I am going to make a cherry pie or crostata tonight and don't have enough cherries.

My grandfather has a great blueberry pie recipe that we use now...and OF COURSE it is made with homemade crust! In fact, I've only used store bought ONCE and didn't like it. I guess I'm what you might call and "pie crust snob!" :-)