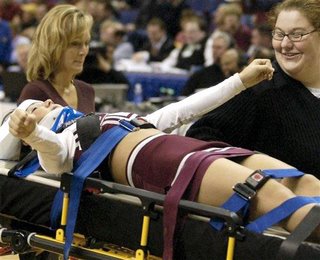 This sophomore cheerleader from Southern Illinois University in Springfield, Ill., has truly inspired me. While performing a routine during a time-out in Sunday's game against Bradley, she lost her balance atop a human pyramid. She fell 15 feet and landed on her head. Ouch. Parametics put a brace on her neck and placed her in a gurney. As they wheeled her away and the band played the school's fight song "Go Southern Go", she gave the thumps up and began to cheer (using her arms, the only thing not strapped down). Wow. She said she didn't want to distract her fellow cheerleaders or the basketball team from the game. That's what I call a team player.
We should all have this kind of enthusiasm for life, altruism and determination. If only.
Posted by Annie at 8.3.06

She was scary spunky.