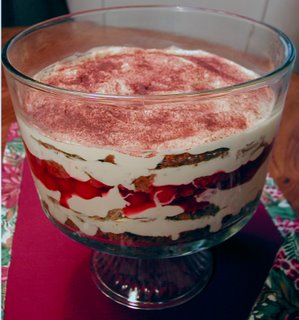 Expect a lot of Ooh's and Ahh's when you set this decadent dessert down on the table. And for good reason. It is beautiful and sinfully rich! It looks like it took hours to make, but it is pretty easy, actually. As long as you have chocolate chip cookies on hand that is. Other wise you would have to bake a batch or you could cheat and use a package of Chips Ahoy! I won't tell if you don't.
I did cheat myself by using Cool Whip Topping instead of Whipped Cream since I didn't have any on hand. And guess what, no one knew the difference.

Ingredients:
1 batch of Chocolate Chip Cookies or Blondies cut up into small squares.
One 8 ounce container of Neufeuntal Cream Cheese, at room temperature
3 or 4 tablespoons Sugar
1 cup cold Espresso (I made instant, you can find instant espresso at any Italian market or in the International Food Isle in the Super Market)
1 recipe Zabalione (Custard filling) See below
1 tub of Light Cool Whip Topping, thawed (or an equal amount of whipped cream for all of you cool whip snobs out there, wink wink-Amy).
1 can of Cherry Pie Filling
Unsweetened Cocoa powder to sift

The first thing you have to do is make the Zabalione which is the hardest part of this recipe. The rest is just assembly, so don't be discouraged. It is actually a lot easier than you think. There are many recipes of Zabalione out there and they are all a little bit different.

Here is my version that I use all the time.

1. Fill a saucepan 1/3 full with water and bring to a simmer over medium heat.
2. In a large bowl, beat together egg yolks and sugar. Whisk in the Amaretto. Set the bowl over the simmering water, taking care that it doesn't touch the water. Whisk for 5-8 minutes, removing the bowl from the heat for a moment if it heats too quickly. The mixture should be thick and foamy.

Mix the cream cheese to soften just until smooth and then fold in the zabaglione. Cover and refrigerate.

Once the Zabalione-cheese mixture is cool, fold in the cool-whip topping. Set aside.


Everyone really enjoyed this dessert. My niece's husband actually said he liked this Americanized version of Tiramisu better than the original. For me, the cherry filling kind of masked the flavor of the zabalione which I love. I still like the traditional Tiramisu best, but I did enjoy this version as well.
Posted by Annie at 19.1.07

Wow! That's a mouthful to say! But soooo good looking.

I love tiramisu! that is cool

Oh my. That sounds sooo good. Can't wait to try it!

the tiramisu' made a great presentation and the flavor was delicious,bambola.

Americanized I guess! Looks wonderful~ and couldn't be much easier (is that the American part?)

Hey everone, It was as good as it looks!!

Sandi, The Americanized part was the substitutions of chocolate chip cookies for the lady fingers and Cool-Whip for the whipped cream!