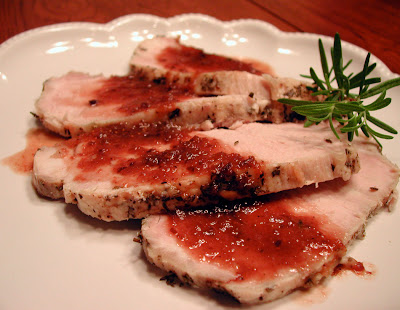 A GREAT RECIPE: TWO THUMBS UP !
I had my family over for an after Christmas party and I needed a really good dinner that would feed a crowd, but not break the bank or me. In other words it had to be cheap, tasty and easy!

This recipe fits the bill. I got my inspiration from Giada DE Laurentiis. I was looking through her cookbook and came across Pork Loin with Fig and Port Sauce.
It sounded so good and with some of my own ideas and my mom's we came up with a winner.

Well ok, I guess it wasn't cheap, but it was reasonable considering the amount of people it fed.

As far as tasty goes, YES,YES and YES! It was absolutely delicous! The oil and herb rub really flavored the roast, plus I stuffed little pieces of garlic into the roast to give it even more flavor (my mom's trick). The fig sauce was so good that I could have drank it straight from a goblet...seriously!

And yes it was easy. The hardest part was peeling the garlic and it took a little time to stuff it in the roast, but it was totally worth it!

After reviewing the recipe with my mom who has cooked a pork roast or two in her day, I decided to change the oven temperature to 375 degrees. She believes in a lower temp (usually 350 degrees) for a more tender meat. I settled on 375 because it was a large roast and I wanted to make sure it was done on time. It came out very tender and juicy. I was so proud, since it was my first pork roast!

I also adjusted the fig sauce recipe to suit the ingredients I had in the house. And as I mentioned it came out fabulous!

For the sauce: In a heavy medium saucepan, combine the first 6 ingredients. Boil over medium-high heat until reduced by half, about 30 minutes. Discard the herb sprigs and cinnamon sticks (it's fine if some rosemary leaves remain in the fig/wine mixture). Transfer the fig mixture to a blender or use an emersion blender and puree until smooth. Blend in the butter. Season the sauce, to taste, with salt and pepper. (The sauce can be made 1 day ahead. Cover and refrigerate. Rewarm over medium heat before using.)

For the pork: Preheat the oven to 375 degrees F.

Stir the oil, rosemary, 1 tablespoon salt and 1 1/2 teaspoons pepper in a small bowl to blend. With a small sharp knife, make small, deep slits all over the roast. Push a slice of garlic in each slit until it is all used. Place the pork roast in a heavy roasting pan. Spread the oil mixture over the pork to coat completely. Roast until an instant read meat thermometer inserted into the center of the pork registers 160 degrees F. (About 20 minutes per pound).

Transfer the pork to a cutting board and tent with foil to keep warm. Let the pork rest at least 15 minutes. Next, add the chicken broth into the roasting pan. Mix in the wondra flour, place the pan over medium heat, and scrape the bottom of the pan to remove any browned bits. Bring to a simmer. Season with salt and pepper, if needed. (Make sure to taste it first since the salt on the outside of the pork has already seasoned the pan juices.)

Using a large sharp knife, cut the pork crosswise into 1/4-inch-thick slices. Arrange the pork slices on a platter. Spoon some of the gravy over and serve the rest on the side. Drizzle the warm fig sauce around or serve in a separate gravy boat and pass at the table. (Some guests may not want it on their piece). Serve immediately.

I've had this before...this exact recipe and it is DELICIOUS!

Pork roast,this is an excided recipe .A fabulous dinner to serve guest or family is absolutely delicious.Thank you Annie,bambola

I made my first pork tenderloin, last summer. They are expensive!

The fig sauce sounds good. My family doesn't like figs, because of the seeds. Isn't that stupid?

Jen, I'm sorry but I just can't give up pork. It's too good.

Bambola, It is great for company and it's so easy.

Emiline, Well I guess a lot of people don't like figs, the seeds don't bother me. I think raspberry seeds are much worse.