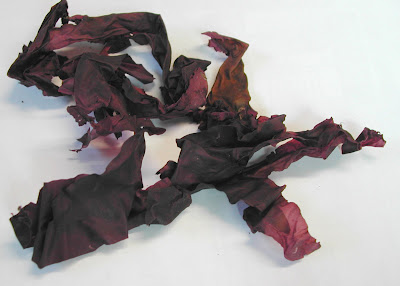 This is a delicacy in Eastern Canada.
It is Canadian Seaweed...aka Dulse.

I think it stinks, both literally and figuratively.

My coworker "Bert" is from Canada and mentioned that he and his whole family love this stuff. He says you can get it at any convenience store in Canada. Last week his sister in-law came to visit and she brought some with her. He was bragging about how great it was to the whole staff. We all couldn't understand what the big deal was.
So low and behold, yesterday morning he presented a ziplock bag which he had stashed in his pocket. Within it contained the beloved "Dulse". I was the first to experience it being the unofficial "office cook".

I had never seen Bert so excited. It was like a child was let loose in the Willie Wonker's Chocolate Factory. He slowly pulled out a piece of the crimson stained seaweed and revealed it to me.

My first instinct was to smell it of course. I took one whiff and nearly lost my all natural grain cereal and soy milk breakfast. It was repulsive. It smelled like he just picked it up off the dirty filth ridden beach shore. Of course, he assured me that during the harvesting, it goes through a cleaning process and was perfectly safe to eat. I had another opinion.

Because I was so reluctant to try it, he immediately tore off a piece and popped it his mouth, chewed it for about 10 seconds and swallowed it down. I noticed when he was tearing it, that it was really "elasticy". I guess that's why he didn't chew it for long.

I'm still laughing just thinking about his demonstration. He really thought it would entice me to try a piece. I had to pass.

Question: Bert would like to know if anyone else has tried dulse and enjoyed it?
Posted by Annie at 3.8.07

I almost ate some
until I smelled it..

Nope, I've never even heard of it.

I am assuming Bert is from Eastern Canada? They sell dulse in the health food shops here, but not anywhere else. I've had it, years ago when I was a vegetarian. It was fine.