My First Taste of Arugula and Goat Cheese 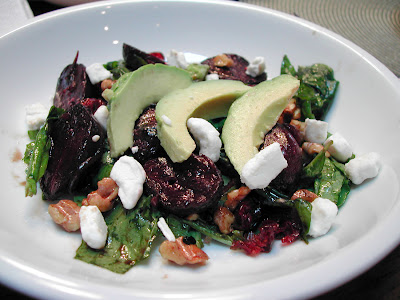 Colorful and Interesting
Believe it or not, this salad was my first time ever using or tasting both arugula and goat cheese. The recipe appealed to me because of the combinations of bitter and sweet. Even though I had never tried arugula I had an idea of what it might taste like, just from hearing so many other people describing it. And the same with goat cheese.

The verdict: I loved the salad, but did not like the goat cheese. This surprised me, because I love all kinds of cheese. It was too harsh and kind of tasted like it was spoiled, even though it wasn't. The only thing I'm wondering about however, is if the brand and quality had anything to do with it. I have to admit, I grabbed one of those already crumbled, pre-packed deals. So I'm not sure if that is why I didn't like it. I will have to try the"real thing" in order to say if I like it or not.

Whisk the vinegar, shallots, and honey in a medium bowl to blend. Gradually whisk in the oil. Season the vinaigrette, to taste, with salt and pepper. Toss the beets in a small bowl with enough dressing to coat. Place the beets on the prepared baking sheet and roast until the beets are slightly caramelized, stirring occasionally, about 12 minutes. Set aside and cool.

Toss the arugula, walnuts, and cranberries in a large bowl with enough vinaigrette to coat. Season the salad, to taste, with salt and pepper. Mound the salad atop 4 plates. Arrange the beets around the salad. Sprinkle with the avocado and goat cheese, and serve.

I'm not a fan of goat cheese either - it tastes like goat! I like just about every other cheese too. I feel so uncool.

Don't give up yet! Goat cheese can be so tasty.

Paula, Yeah me too. I feel like I must have tasted it wrong or something. How could I not like it?

Sara, I probably will try a fresh cut piece from a cheese shop before I say that I don't like it.

yeah you should try to find the Coach Farm Goat cheeses, there FABULOUS, they are wrapped in white plastic and have black writing on it, they dont look fancy, btu they are amazing