Vegetable Soup...Good For You, Right??? 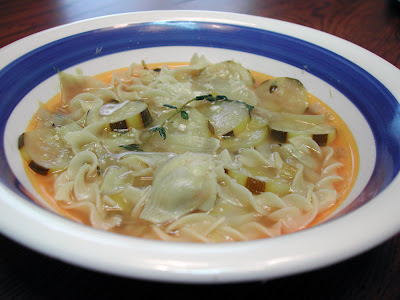 Not always. But the Mixed Salad Annie version is!
This recipe is another from my favorite TV chef, Giada DiLaurentiis. I was a little disappointed with her this time though, since the sodium content in this soup is through the roof! The original recipe calls for 10 cups of vegetable broth. Assuming she is using canned broth, the sodium content in one cup is around 950 milligrams. Too much for me or anyone who wants to live another 10 minutes.

All is not lost. I revised the recipe by diluting the broth with water and adding in a few more herbs and flavorings. It was still very good. Very tasty. The trick is to make it a day ahead, so that the flavors have a chance to develop and meld.

By the way, this was my first time using LEEKS. The verdict: I'm a big fan. No nasty onion smell in the house and a sweet mellow flavor!! Two thumbs up!

Heat the oil in a heavy large pot over medium heat. Add the leeks and saute until translucent, about 8 minutes. Add the garlic and saute until tender, about 2 minutes. Stir in the zucchini and artichokes. Season the vegetables with salt and pepper. Saute until the zucchini are tender, about 10 minutes. Add the vegetable broth and water. Stir in the thyme and bay leaves and cook for 2 minutes. Cover the pot and bring the soup to a simmer. Decrease the heat to medium-low and simmer gently until the flavors develop, stirring occasionally, about 20 minutes.
At this point I stopped the cooking, let the soup cool, refrigerated right in the same pot until ready to use the next day.
Reheat the soup on medium heat until it reaches a slow simmer then increase the heat to medium-high. Add the noodles and cook until al dente, stirring constantly, about 5 minutes.

Ladle the soup into bowls. Sprinkle with Parmesan and serve.
Posted by Annie at 21.2.07

Let me tell you thi soup is great,is good ad good for you.Thank you Annie,Bambola

Can you get low-sodium vegetable broth? I only buy low-sodium chicken and beef broth. It's still got a lot of sodium, but better than the regular stuff. I like Pacific brand (haven't tried their vegetable broth).

Everything else in her recipe besides the cheese seems light on the sodium.