Brining Chicken- What a Disaster! 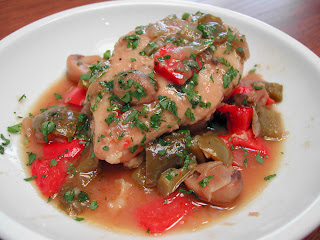 Well it was, sort of, if it wasn't so damn salty, that is.

I had heard that brining chicken makes it tender and juicy, so why wouldn't I want to try that?

The only trouble is, I used a recipe that obviously had problems. It was actually for country fried chicken pieces. Since I was using chicken pieces in my recipe I thought it would be OK to start my recipe with some nicely brined chicken. The recipe called for soaking the chicken for 3-4 hours in a solution made up of 1 cup of salt to a quart of water. That's a lot of salt!
But I figured I would try it and boy was it salty. The only thing I can think of is that maybe because my chicken was braised in chicken stock (low sodium) it intensified the salty flavor. Maybe the frying process is different???
Besides the saltiness, the chicken wasn't all that tender or juicy either. I don't know why. I wonder if it is due to the sauting process, because I have a hard time controlling the temperature of my electric stovetop (which I can't say enough that I HATE). All I do know is it was such a disappointment because I think the dish has potential. I will try it again someday with some revisions.

Here's the recipe without brining the chicken:

Skillet Chicken with Mushrooms and Peppers 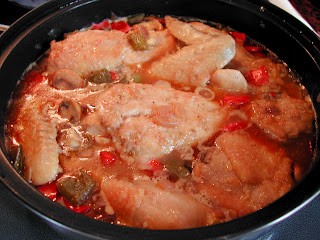 Sprinkle chicken with 1/4 teaspoon salt. Dredge in flour. Heat oil in a large skillet over medium-high heat. Add the chicken pieces and brown in the oil, working in batches if necessary to avoid overcrowding the pan. Remove chicken and set aside.

Add the onion, peppers and mushrooms an saute for 10 minutes, until golden brown. Add the garlic and cook for one minute. Add the chicken broth and lemon juice, return the chicken to the pan, allow the broth to boil and then reduce heat to a simmer. Cook the chicken for 45 minutes, adding more broth if necessary to keep the meat from getting dry. (I skimmed off some of the fat from the chicken skin). Stir in the parsley and basil. (Just before serving, I removed the the bones and skin from the chicken).

If you try this recipe with your own modifications and have great results-let me know what your secret is to getting tender and juicy chicken.
Posted by Annie at 18.2.07

this does look good. I was about to laugh at using low sodium chicken broth until I realized it was for WITHOUT the brining. I may try this later...it looks good. i'll let you know how it goes.

hrm...I'm so curious to try brining myself

I've been thinking about trying brining a chicken or turkey, but you bring up a good point about the salt. I have tons of relatives with high blood pressure and I'm not anxious to join their ranks.

Claire, I hope you do try it. Let me know if your secret to tender chicken!

WWM, Proceed with caution! I actually did find a better recipe from Cooks Illustrated-if you want it let me know.

Sara, I think brining is probably alright if it is done right. In this case the recipe was way too salty.

I brine a lot of different meats but I always reserve that for cooking meats the dry method. Braising will make old shoes juicy and tender so no need there.

Did you use kosher salt? That makes a difference and that does seem too much for a quart. I like my chicken swimming in at least two quarts. You can also rinse the brine off but if I've done a sweet brine for the bbq it gives the skin a nice flavor. Don't give up, brining keeps dry roasted meat wonderfully juicy.

MoonCrazy, Thanks for the info, I will try it again when roasting!