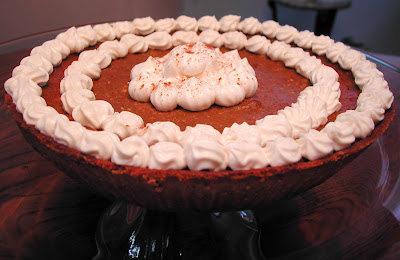 One To Serve~Six To Give (or keep!)
This recipe is a cross between a traditional pumpkin pie and a pumpkin cheesecake. Instead of using a cup and a half of milk, you use one 8 ounce package of cream cheese. The original recipe came from a website called myrecipes.com and it called for 2 refrigerated pie crusts. One was used for the bottom crust and the other was used to make cut-outs of leaves for decorating the top of the pie. It looked really great, but I was not in the mood to fiddle around with leave cut- outs so I opted to use pre-made graham crusts.

I had a feeling there would be extra pie filling left over once the 9" crust was filled, so I also picked up 6 mini graham pie crusts just in case. I was right (as always ;), and I was able to get all six mini crusts filled. It worked out great because I brought the large pie to Thanksgiving dinner and gave away the mini pies to some very lucky people. Of course, I also kept one for myself (I mean I had to make sure it was edible!) 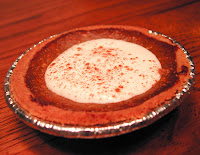 Bake at 425° for 15 minutes. Reduce temperature to 350°, and bake 30 more* minutes or until pie is set. Remove pie to a wire rack; cool. Serve warm or chilled decorated with cool whip, if desired.

*Check the mini pies with a toothpick at 20 minutes. Remove if toothpick comes out clean.
Posted by Annie at 27.11.07

Like always you have a winning pie is delicious.bambola

What?? How did I miss this post?
I'm days late.
Anyway, it sounds really good. I love anything pumpkin.

Bambola, Thanks as always for your high praise.

Emiline, I am so sorry but I just now realized that your name is Emiline and not Emiilie. I guess I'm a little slow. I've also been so behind on checking your posts. I'm coming over now ;)