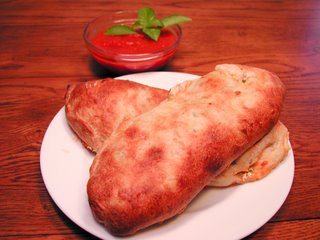 Fill Em Up and Chow Em Down!

This was a quick way to make-over meatballs and sausage. With a can of Pilsbury Italian Loaf Bread in the fridge getting close to the expiration date, I was ready to create the perfect calzones. Or so I hoped.

There were plenty of fillings to choose from in my fridge to go with the meatballs and sausage but I narrowed it down to these: Ricotta Cheese, Mozzarella Cheese, Roasted Red Peppers, Red Onion, Black & Green Olives and Fresh Parsely and Basil.

I had never tried using canned dough for anything but what it was meant for, so it was kind of an experiment. I cut the dough into 4 equal pieces, formed circles and stretched it as much as I could without tearing it. 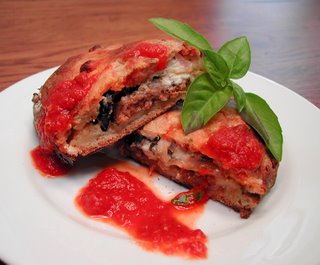 I sliced the meatballs, sausage, onion, olives and red peppers, piled the fillings on one side, leaving enough dough to fold over and then crimped the edges. I also added just a little tomato sauce to keep it moist. For a nice brown crust, I brushed the calzones with a little milk before putting them in a 450 degree oven. I baked them for about 20 minutes or until they looked light brown and crispy.

For garnish, I served the calzones with tomato sauce which made it nice for dipping.

All in all, I would have to give them a rating of "pretty damn good". For a store bought loaf bread, the crust was decent and the meatball and sausage filling was even better the second time around. I guess anything would taste better if it was covered in cheese, peppers, onions and olives!

I have another can Pilsbury Breadsticks in the fridge that is getting close to the expiration date. I was thinking about making something like cinnamon sticks.
Does Anyone Have Any Suggestions or Ideas?
Posted by Annie at 18.10.06

cinnamon sticks are my favorite!! How about some sticky pecan rolls? I'm not quite sure how they would work with the pizza dough, but 'tis worth looking around. :)

yep I have a recipe SOMEWHERE for pecan rolls using breadsticks. Have only made them once but they were tasty. I'll look and email you.

I'd make garlic parmesan twisty bread with it!

Cinnamon sticks sound like a great idea to me!

I had the prosciutto-wrapped breadsticks with canned dough,was delicious.But you never know how it would be as cinnamon stick.The best way is to try ok? bambola.

Those calzones do look pretty damn good! I have a recipe at home where you cut the breadstick dough into pieces, roll them into balls then dip them in melted butter and sugar. Then you put 3 or 4 pieces into a muffin cup and bake, or something like that. Now I'm getting hungry!

Oh yum! I adore weekday dishes that you can whip up in a hurry to satisfy a family, what a great suggestion!

email me at PBEtouffee@gmail.com and I'll send it to you