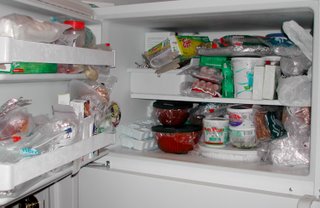 My freezer... at full capacity!
Wow, I don't know how this happened. It seems like all of a sudden, almost overnight, I created freezer overload. I'm trying to figure out what is in there. It's not like I have 20 lbs. of chicken, 15 lbs. steak, and 10 lbs of pork chops hanging out in there. Actually, I think the only piece of meat in there is a single center cut pork chop. The rest is stuff, either I made or my mom made and gave me. (Sometimes she makes too much for herself and gives me some of the leftovers, in case I don't have time to cook one night after work. She's sweet like that!)

In any case, I decided it was time to start eating some of the food in the freezer. Tonight I defrosted some leftover Caponata, that I made about a couple of months ago.

Caponata is a sicilian vegetable dish made with eggplant and is often eaten as a relish, accompaning pork roast or fish. It has a sweet and sour flavor and can be eaten hot, cold or even at room temperature as an anitpasto over crostini. There is a tangyness from vinegar and a sweetness from sugar that awakens your tastebuds.

I had frozen just enough for one meal. Once heated through, I tossed it with mini penne and garnished with fresh basil. It was a pleasant change from the usual weekday dinner. I enjoyed it thoroughly.

The recipe is from Giada DE Laurentiis. In her cookbook, Everyday Italian, it is listed as Everyday Caponata and makes 6 side dish servings. On the Food Network website, she lists the same recipe (basically) with a few minor changes. It is shown as... 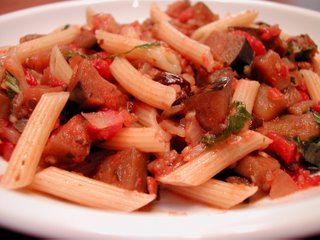 Cut the bread pieces horizontally in half. Grill the bread cut-side down on a grill pan over medium-high heat until golden, about 2 minutes. Rub the whole garlic cloves over the toasted side of the bread. Add a slice of mozzarella to bread bottom, spoon the caponata on top, cover with the other bread half, and serve.

To take for a picnic: Wrap the sandwiches separately in plastic wrap or parchment paper. Chill until ready to serve, or keep at room temperature up to 1 hour.

Annie!Oh myGeez! I just had to comment that this post just cracks me up because your freezer looks JUST LIKE MINE!!And, everyone ALWAYS gives me such a hard time, well, just my Mom, Sis and "the big guy". The fridge looks just like the freezer, then there is the mudroom fridge/freezer combo that looks "twin" to the house fridge/freezer combo and then ....there is the BIG chest freezer in the garage that I have no clue, really, what the heck dwells in there. I told my Mom to please come over this winter so we can clean it out and take the stuff to the FFG (frozen food graveyard!). Unbeknownst to "the big guy" of course.(:

no Annie you are not alone in the "oh my word what is that in my freezer"! This is the time of the year that I concern myself for the dreaded overload because of a power outtage due to a dreaded hurricane. I must say I have done myself proud this year not a ton like last year I had to dispose of way too much :( Oh well live and learn. So yep you are good company I think - well depending on how ya look at it.

My freezer looks like that, too. HOwever, I am lacking one of the shelves so it probably has less in it! I have frozen veggies, coffee, bananas, blueberries, ice packs, chicken, fish, butter, and a quick fix meal.

My freezer has many things in it, mostly meat. A couple of interesting pieces of meat are the turkey I got from the company I work for, for Thanksgiving last year and the ham I got at Christmas. I keep telling myself I have to make them! I should invite company over and make the turkey as it is at least 20 pounds and would make a nice meal for a lot of people. Plus I could use the leftovers in so many dishes.

My freezer is packed to the gills. I have hamburgers, hot dogs and chicken in there for my cookout. Once they come out, I'll have a bit of breathing room in there. Also lots of ground meat, a bit of pork and chicken, some fish. Frozen burritos and spring rolls. A dead squirrel. Lots of frozen treats for my son. Lots of other stuff too.

WMM, What would we do without our MOM'S?

Kim, I used to have to through things out of my Mom & Dad's Freezer without my Dad knowing too. He would get so mad, 'cause he thought things lastest FOREVER.

Doodles, You're always good company in my book. I never ever thought about an outage. Now I'm really worried!

Claire, No shelves? That must be tough! How do you find anything?

Lou, Sounds like you could invite the whole neighborhood over. Better start planning now!

Paula, You got me with the Dead squirrel! Did you throw that in to see if I was paying attention??? HAHAHAha

My freezer looks slightly worse than yours. I have no idea what's in it either.

DIG!!!!!!! My fridge is one of the apartment allocated ones. I actually found it in a store when my parents were looking for their new one. Go figure, it was the cheapest one there!

Sara, I'm slowly finding out what's in it and I'm actually happy to use the stuff up!!

Claire, I would need to wear gloves 'cause it seems it would take a while to get through it all!!! HAHAHA!!