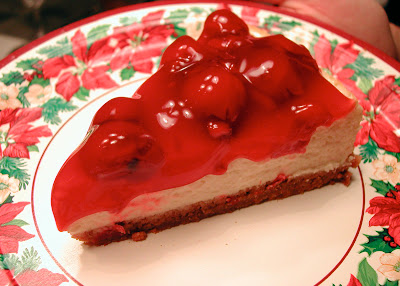 Cherry Cheesecake for the Holiday...
So Apropos!

In keeping with my "healthier eating theme", I decided to go with a light New York style cheesecake. And who would know how to make the "best" light NY style cheesecake? America's Test Kitchen of course!
I do not own the America's Test Kitchens Best Light Recipe cookbook, but I did see this recipe on their tv show on PBS. I usually save the shows that I like on my DVR so that I can go back and watch them over when I want to make something, but this time no such luck. I had to search the internet for the recipe and finally found it.
I don't feel right to post the original recipe since I don't own the cookbook (even though you can find it just like I did) but I will tell you about some revisions that I made.
If you are a fan of America's Test Kitchen, you are probably wondering why I would make revisions to a very well tested recipe. 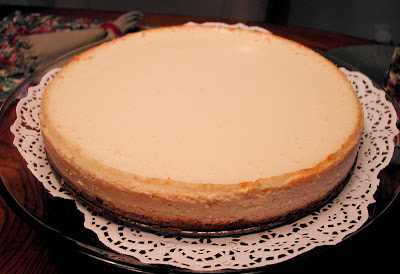 Well there were 3 simple reasons...
1. I do not own a 9" springform pan which the recipe calls for. I have a 10" pan and I was afraid that if I followed the recipe exactly and used the wrong size pan, something was bound to go wrong.
2. I decided to make this at the last minute and didn't have time to make their version of yogurt cheese which takes 10-12 hours.
3. I wanted to flavor the cheesecake with my own personal touches. 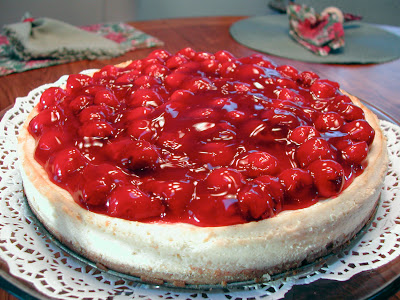 So here are my revisions:
1. Since I was using a 10" springform pan, I increased the amounts in the ingredients for the crust. I used...
11 1/4 whole graham crackers (and I used honey graham)
5 tablespoons of unsalted butter
1 1/2 tablespoons sugar

Also the size of the pan affected the cooking time. It was done in 1 hour and 15 minutes.

By the way, the cheesecake turned out really well, everyone loved it and I will definately use this recipe again!
P.S. I could email the recipe if it was an emergency ;P
Posted by Annie at 4.1.09

This looks great, I remember watching the episode on tv where they made it.

I was under the impression that Greek yogurt and yogurt cheese were basically the same thing; if you strain regular yogurt, you get yogurt cheese. Greek yogurt is already strained, so you get to skip that step. Am I wrong?

I'm afraid you did more work than you needed to! The cheesecake looks and sounds delish!

Kim, great question. I strained the greek yogurt because the yogurt cheese really needs to be thick.
Since I started with 12 ounces of yogurt, straining it for 3-4 hours let out just enough liquid to give me just a tad over 1 cup. Thus making it more like "cheese" than yogurt.

Gosh that looks great! Except now I want cheesecake. :(

This was GOOD STUFF