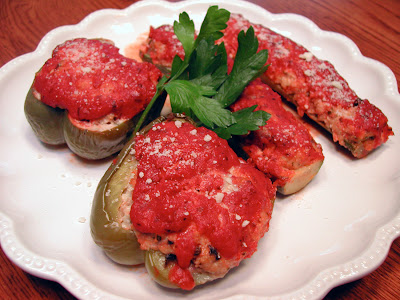 Hearty and Satisfying!
If you like meatloaf and you like stuffed peppers, than you will love this recipe. It is very different from the stuffed peppers that I was brought up eating. My mom used to make stuffed peppers with ground beef (or sometimes ground turkey), onion, garlic, rice and tomato sauce. And of course I followed suit, making them pretty much the same way.

In this recipe you actually make a meatloaf filling and stuff the peppers and zucchini with it. No rice at all. It is really good. The other thing I like about this recipe is that if someone in the family doesn't like peppers, they can eat the stuffed zucchini instead. The only thing I might change the next time I make them is to lightly saute the shallots (or in the original recipe, onion) before adding it to the meat mixture. It had a little bit of a raw bite to it. But other than that, I enjoyed them thoroughly.

Preheat the oven to 400 degrees F.

Carefully scrape out the seeds and inner flesh from the zucchini with a melon baller or spoon, leaving 1/8-inch-thick shells, making sure not to cut through the skin.

Lightly drizzle the olive oil into a 13 by 9 by 2-inch baking dish. Whisk the shallot, parsley, egg, ketchup, garlic, salt, pepper, cheese and bread crumbs in a large bowl to blend. Mix in the turkey and combine with your hands.

Bake uncovered until the vegetables are tender and beginning to brown and a thermometer inserted into the filling registers 165 degrees F, about 40-50 minutes. Transfer the stuffed vegetables to a platter and serve.
Posted by Annie at 30.11.08

That dish brings back nostalgia for me!!

This is great comfort food. I always had no rice in mine growing up.

that looks delish! i think we had rice, but i might be thinking of stuffed cabbage...

ps- thanks for the tip about smart balance!

I made this recipe a while back, I remember we liked it a lot.

I was so excited to see bags of peppers on clearance last week. They used to be under $1.50/bag but they were close to $4 this time (they were all the more expensive colored peppers). I passed on them since I had nothing in mind but now I wish I hadn't. You've made me hungry for stuffed peppers.

I had stuffed peppers for a long period of my life I changed with grown turkey but almost the same.Zucchini is a big change and plus is very very good,thank you Annie.bambola.

I love these guys plain but stuffed is even better!

Oh, how I love stuffed peppers. Thanks for reminding me to make some; it's been too long!

nice! i've never had a stuffed pepper with meat before.
i'm making your squash lasagna tonight!