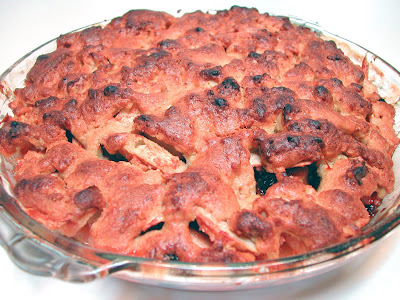 It's Apple Season...
Cobbler or Crisp? Why not both.
I love apple pie but I very rarely make pie crust. I leave that to my Mom. Instead I like to make apple cobbler or apple crisp, both are quicker and easier to make than a pie crust, and in my opinion a little healthier too.

Cobblers are so named for the cobbled look of the crust when it's cooked. It usually consists of flour, sugar, eggs and butter; similar to a biscuit topping. This time I added toasted walnuts and I loved it.

Crisps are more of a crunchy or "crispy" topping usually made up of butter, flour, oatmeal and sometimes nuts. The inspiration for my crisp came from Susan over at Food Blogga. She has a great recipe for a Triple Berry Rhubarb Crisp. Susan has a knack for making the most delicious recipes without over loading them with too much butter and/or sugar. I changed her crisp topping recipe a little by adding organic unsweetened coconut (because I am alergic to the sulfites in the sweetened coconut) and flax seeds to healthy it up a little bit more. I also used toasted walnuts instead of almonds because I had them on hand. 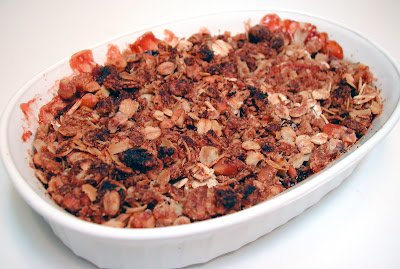 Since I was making a cobbler and not an apple pie, I had to make sure my apples weren't plied too high in the pie plate so the topping wouldn't just slide off. I used just enough apples to fill the pie plate for my cobbler and then I filled a small casserole dish with the remaining apples and topped it with my crisp topping mixture. So in the end I had the best of both worlds!

In a very large bowl, mix the apples and lemon juice. Add the sugar, cinnamon, apple pie spice and tapioka. Set aside for about 10 minutes.

To prepare topping, mix together flour, sugar, baking powder, salt, butter and eggs.
Grease a pie plate with butter or margarine and fill with enough apple mixture so that it is even with the top of the pie plate. Spoon cobbler topping over fruit.

Add the remaining apples to a small greased casserole dish and top with the crisp topping.

Bake cobbler and crisp until topping is lightly golden and apple mixture is bubbling, about 35-45 minutes. Transfer pie to a wire rack to cool slightly. Serve warm.

This is a perfect fall dessert.

Man, I haven't had an apple crisp in years! When the weather cools down I am making this.

I love these! And it's my favorite time of year, with all of the great fall baking going on.

Your dessert is great and delicious.bambola

I love apple season! Haven't made a cobbler in ages, and think we're overdue. Sounds perfect for a belated birthday dinner this weekend.

Yay! I'm so happy you adapted my recipe! I love the sound of this, especially with apples just coming into season here. Of course, there's nothing like New England apples. :)

I started using the raw, unsweetened coconut, since you mentioned it to me. I think it has a more robust, coconut flavor.