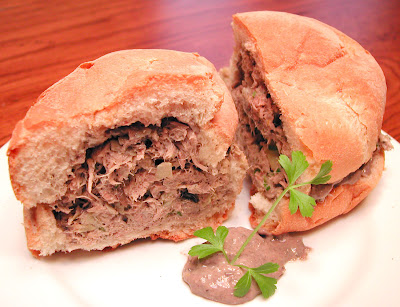 This was a Yummy Sammy!
I have been thinking about making this sandwich for the longest time. I think I printed the recipe out almost a year ago from the food network (by Giada De Laurentiis, of course). I finally had the opportunity to make it because I actually ran out of chicken or any other meat in the house. It forced me to look into the pantry closet and cabinets to find an alternative. I had a large can of tuna and marinated artichokes so I knew it was the perfect time to make this recipe.

The mayonnaise spread was really tangy and delicious. I only used one clove of garlic as opposed to two as the original recipe stated and I'm glad I did because it was strong enough. I also tried to keep it on the light side and only used 1/8 cup of mayo verses 1/4 cup in Giada's version. The one thing I suggest not changing is using tuna packed in oil. I had a 12 ounce can of water packed tuna which I drained and added one teaspoon of olive oil to. It was good but I know the Italian tuna packed in oil is much tastier. So try it if you have the chance.

Puree the olives, oil, garlic, and zest in a small bowl with an immersion blender or in a food processor until smooth and spreadable. Blend in the mayonnaise. Toss the tuna, artichokes, lemon juice, and pepper in a medium bowl, keeping the tuna in small chunks. Add one tablespoon of the mayonnaise mixture and mix to combine.

Those Portuguese rolls look so good! I'm never one to turn down a panini. I've never had a tuna panini, as I was brought up in an anti tuna household. I like tuna, though.

Yeah, I know a lot of people who don't like tuna, the smell reminds them of cat food. Oh well, more for us!

I love the green background, that's my favorite color! It just brightens my day!