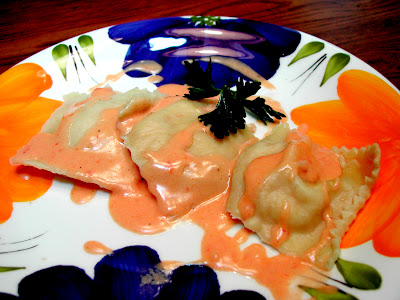 There's a place in Providence, RI on Federal Hill (Providence's Little Italy) called Venda Ravioli that is famous for its, well ravioli. It started out as a very small family run pasta making business and has grown leaps and bounds since. Now they have a large Italian gourmet grocery section, prepared entrees, a full-service deli, where you can find all sorts of imported italian meats, cold cuts, dried sausage, cheese, olives and the like. They even have an indoor cafe and and outdoor eating area as well as a first class restaurant called Costantino's Ristorante & Caffe.

They still make the pasta from scratch and it is often served at many of the local Italian restaurants on the hill and elsewhere. I have tried the spinach and ricotta ravioli, the tri-colored tortellini, fresh fettuccini and most recently, the lobster ravioli. My brother bought them for my mom for Mother's Day because she loves lobster. You can order them online right from their website. They are frozen and kept that way right up to the point of cooking.

First let me say that I am not a lobster afficianado. I enjoy it from time to time, but it is not my favorite food. With that said, I can tell you that these lobster ravioli ROCK! I cooked them for my mom and topped them with Venda's own Pink Vodka Sauce and it was the perfect compliment.

By the way, the sauce can also be frozen until ready to use (which is what I did) and it was fantastic. As a matter of fact, I still have half a container left, along with the rest of the ravioli. They won't be there for too long! Don't worry mom, I'm saving them for you.
Posted by Annie at 4.6.07

Wow, I think I'd sell my left arm for some of those right now!

If I may say dont sell your arm jusy go to Venda like we do their product is excellent,the lobster ravioli deliciosi.Bambola