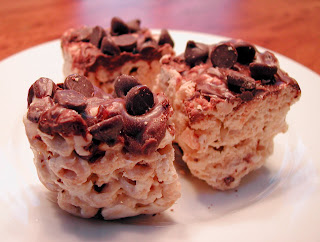 I had two boxes of Honey Nut Cheerios tucked in the back of my pantry closet and needed to The first recipe I found is from Odense Almond Paste and the original recipe is called Coconut-Almond Crispy Treats. Even though it called for Rice Crispies and the Odense Almond paste, the recipe was great even without them.

Directions:
1. Butter a 7-inch by 11-inch baking dish. Measure cereal into a large bowl and set aside.
2. Add coconut flakes and peanuts to a large non-stick skillet. Dry roast over a medium-high heat, stirring frequently, until the coconut and peanuts start to turn golden. Immediately pour into bowl with cereal.

3. In the same skillet melt the butter over a low heat. the marshmallows. Stirring constantly, cook until melted and smooth.
4.Immediately pour marshmallow mixture into bowl of cereal. Combine with a buttered spoon until all ingredients are incorporated.

5. Press crispy treats into a buttered dish. Cool until firm enough to cut into 1.5 inch squares.
6. Top with melted chocolate of your choice and sprinkle with mini chocolate chips. 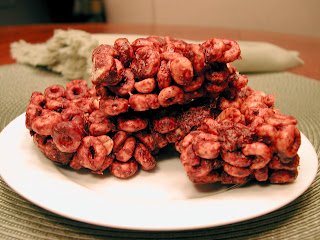 This next chocolate rice crispy treat recipe is an Australian recipe called Chocolate Crackles . I changed it a bit, again using Honey Nut Cheerios instead of Rice Crispies and I cut out some of the Coconut Oil and added some margerine and peanut butter.

The flavor was awesome but they didn't stay together as well as the recipe above. I spread the mixture in a baking dish just like the last recipe and didn't put them in paper cups as the recipe suggests. I would definately do this next time because I think they would have stayed together better.

1. Melt the coconut oil, peanut butter and margerine in a saucepan over a low flame.
2. Sift powdered sugar and cocoa powder together. Stir in Honey Nut Cheerios and dried coconut.
3. Stir dry ingredients into coconut oil until well mixed.
4. Scoop small portions into paper muffin cups. Chill in the refrigerator till firm and serve.

VARIATIONS
* Coconut oil can be found in health food and specialty stores. If you can't find coconut oil, eliminate it and the cocoa powder, and substitute one 12-oz bag of chocolate chips instead. Melt gently over low heat and stir in the rice crispies and shredded coconut. It won't be quite the same though.
* Sometimes sultanas, or golden raisins, are mixed in along
* Chocolate crackles are a favorite of Australian children and are often served at children's parties.

I wanted to eat the entire
plate..

mixed salad annie is a chef

My family loved these recipes! I'm not much for coconut so I didn't try them but everybody else devoured them in about two seconds literally.

what a creative use of cherios!

Just looking at your blog today is making waiting until dinnertime VERY hard. Everything looks so good!

Hey everyone, I'm so glad you are trying the recipes and at least enjoying looking at them!! Thanks :)