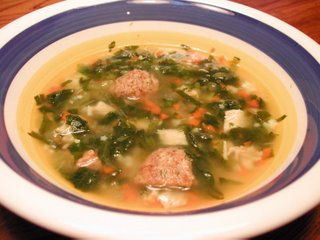 Sometimes when you read through a recipe you notice a few things that you would do differently, from experience or somtimes just instinct. Well in the case of this soup, I knew that I should cook the escarole separately and add it in when ready to serve. But, the recipe said to cook it in the broth, so I did and it was a disaster. The escarole turned the soup into a swampy dark green color and it didn't smell right either.

Let me first say, however, that I planned on making the soup the night before and serving it the next day. I guess if you were to make the soup and eat it all that day it might be ok. But for me, the idea of making soup appeals to me because I look forward to eating it for a few days after making it.

So I would never add the escarole in the pot unless I knew it was all going to be gone that same day. I actually save the escarole and pasta in separate containers and add them to the soup bowl before laddling in the soup. This way the broth says nice and bright and the pasta doesn't get too mushy either!

The original recipe also added onions and an egg/cheese mixture which is traditional to this soup. I chose not to add either. I don't think the soup keeps as long in the refrigerator when onions are added and I don't really care too much for the egg mixture.

I'm posting the recipe with my changes. The original recipe was printed in my local newspaper years ago and it was from Vaccaro's Trattoria in Ohio.

In a small bowl, soak the bread in the milk. Combine all ingredients except ground beef in a large bowl and mix well. Add in beef and gently work the mixture with your hands until evenly combined. Do not overmix.

Bake in a 350 degree oven for 10-12 minutes, turning half way through. At this point, the meatballs may be cooled and refrigerated or frozen until ready to use.

Measure all ingredients and place them in bowls on the counter.
Bring broth to a simmer in a large soup pot. Add carrots, celery, bay leave, meatballs and chicken. Simmer uncovered for around 30 minutes, until the carrots are tender. Season with ground pepper.

Portion out the escarole and pasta in the soup bowls. Laddle the soup in each bowl and sprinkle with a generous amount of Pecorino Romano cheese. Serve immediately with crusty Italian bread. Remember to remove bay leave and discard.


I really enjoyed this soup! The only thing I might try next time is to add in a little onion powder since I omitted the onions. I'm not sure if it would make a difference but I'll give it a try.

A little of both. I still make mistakes. Every time I make one, I'm more likely to trust my instincts the next time.

I usually follow my instincts despie the fact that they continuously lead me astray...

Mmm that soup looks good! I usually follow my instincts, except when it's for baking. Then I don't change a thing.

I made this too a few days ago, but I used a different recipe. I also made turkey meatballs, used spinach and cheese tortellini. it was so good.