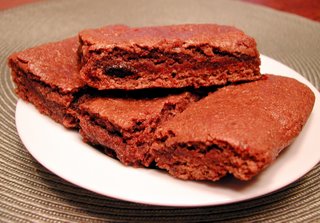 The Quintessential Fall Cookie
(At least in my book)
When I think of a Hermit cookie several thoughts come to mind. I imagine cool weather, colorful foliage, and spicy flavors.

I don't think of anti-social people secluded in the deep woods. So I can't imagine why these cookies are called Hermits.

The dictionary's definition of a hermit is:
Quite a contrast in comparisons, isn't it?

O.k. enough about that and on with the recipe. Actually, I don't know where this recipe came from. I cut it out of the newspaper years ago and there was no credit given for the author. I included the recipe exactually as written and included my changes in red.

I decided to make them lower in fat by changing some of the ingredients, but I have to tell you that I did have a few problems with the baking time. I'm not sure if it has to do with the different ingredients or the recipe in general. In the end though, they did turn out good!

Combine the wet and dry ingredients alternately with the molasses and milk. Add the beaten egg and raisins. Mix well.

Spread mixture on a greased baking sheet so that it is about 1/2 inch thick.( I did this free form in a cookie sheet on parment paper. The dough did not touch the sides of the pan.) Bake for 10 to 12 minutes. Be careful not to overbake the cookies. (After 12 minutes my cookies were still raw in the middle, so I left them in for another 10 minutes.)

When they are firm to the touch, they are done. Cut into oblong cookie shapes. If desired, you can sprinkle confectioners’ sugar over the tops of the cookies while they are still warm.
Note: You can substitute Crisco or another shortening for the lard. Also, you can use 1/2 cup brown sugar and 1/2 cup granulated sugar, and you can add 1 tsp. ginger and 1 cup of chopped walnuts, if desired. Makes 24 hermits.

Does Anyone Know Why Are They Called "Hermits"?
Posted by Annie at 3.10.06

I don't think anyone knows but here's as good a theory as any:

My stomach is growling for these! YUM! I think I must make them!