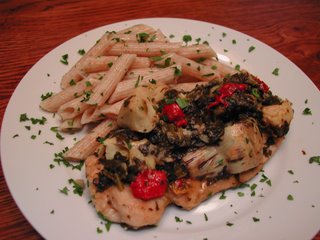 I just sort of combined two different recipes to make this dish.

I was flipping through an old cookbook I got when I was in college - Italian Cooking For Dummies® by Cesare Casella and Jack Bishop.

Ok, don't laugh, I have made a few good dishes from this cookbook, but I don't really like a lot of the cooking methods. Or should I say, the way they explain the recipes. Sometimes I feel like a Dummie when I'm trying to follow some of the steps in their recipes. Lets just say that if it is supposed to be written for dummies, it should be a little more user friendly.

Back to the Chicken. I used:

In a medium bowl, add the artichoke hearts, chopped garlic, half of the parsley, 1 T. olive oil, roasted peppers, and spinach. Mix together and set aside.

Season the chicken with salt and pepper. Lightly flour the chicken and saute in 2 tablespoons of olive oil for 2 to 3 minutes on one side or until golden brown and 1 to 2 minutes on the other side. Remove the chicken from the pan and add juice of 2 lemons (about 1/3 cup) scrap up brown bits and add chicken broth. Cook for about 2 minutes or until it comes to a boil.

Lower the heat to medium and add the spinach mixture and chicken. Cover and let simmer for about 15 minutes until chicken is no longer pink. Add the parmigiano cheese and the remaining parsley. Serve with your favorite pasta. (I used whole wheat penne, drizzled with olive oil and parsley and then mixed it in the spinach mixture, after I took the photo).

The two original recipes from the cookbook that I combined and altered were; Chicken Cutlets with Spinach and Chicken Cutlets with Artichokes.
Both original recipes call for 1 cup of white wine which I replaced with chicken broth. I don't use wine very often in cooking and most times substitute chicken broth. To replace the missing acid from the wine I added juice from one extra lemon since the original recipe called for only one. The recipe for Chicken Cutlets with Spinach called for plum tomatoes or tomato and basil sauce which I also opted not to add. I just did'nt feel like eating a tomato base sauce. I decided to add the parmigiano cheese which rounded out all the flavors. I also added some seasoning to the flour for additonal flavor.

All in all I think it turned out well. If I had to do it again though, I would definately peel the outer leaves of the artichokes. They were sort of hard and pointed around the edges. And if you don't like a sharp lemon flavor, just use the juice of one lemon instead of two.

Do you use wine in cooking and if not what do you use to replace it?
Do you have a common substitution in recipes?
Posted by Annie at 28.6.06

that pic looks good!
but hold the Artichokes...!!
euu!

I use cooking wine! I'm not ashamed to admit that although I know many people think that's a big no-no but I'm not serving any wine experts in this house. I rarely have drinking wine in the house. Cooking wine lasts quite a while (up to 16 months after opening according to the Holland House website but I haven't had any quite that long) so it's very convenient to keep on hand.

Actually mean a combination dish it came out very good,if I wanted to change a little I would put only one lemon.The chicken was very tender.If I had to use wine I would use the real one or nothing.

Thanks for stopping by my blog!

I use wine if I have it in the house (rare), or chicken or veggie stock in place of it, depending on the use.

If I don't have wine I would drink in the house, I would usually sub some sort of stock - seems to work well in most recipes!